Awarding-Winning Irish Cider Set To Become Taste of The Summer

MacIvors cider collected a gold medal and the acclaimed Champion Cider award at the cider industry's 'Oscars' at a gala event in London.

The family-owned and run company became the first Irish cider producer to win a gold medal in this prestigious event for its Traditional Dry Cider (5.6% ABV). 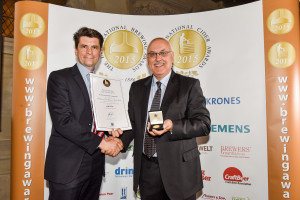 Established in 1888, The International Brewing and Cider Awards are internationally regarded as amongst the most important and influential industry events.

Commenting on the award, Greg MacNeice, Director and Cider Maker at MacIvors, said: "Winning a gold, then Cider Champion, in this global competition is such an honour. This is the standard we aim for at MacIvors.

“The judging panel of international cider experts have recognised that MacIvors cider is an exceptional product of premium quality and outstanding flavour.

"This endorsement will be immensely important to MacIvors Cider as we seek to expand our business in Europe and the US. It also signals that Northern Ireland is fast becoming a significant producer of the finest quality cider and we are proud to be part of that."

Chair of judges Bill Taylor added: "Close to 1,000 beers and ciders were judged at Burton-upon-Trent earlier this year, so to be chosen as one of just 10 Championship winners is a tremendous accolade and the brewers and cider maker who are lifting trophies today should be very proud of their achievement.”

MacIvors sells its ciders in the UK, Republic of Ireland, Finland and Germany.

Sales of cider in the UK have topped the £1 billion mark for the first time since 2014, according to data from Nielsen. Cider sales rose by 5.5% year-on-year to just over £1 billion during the 12 m...

Almost A Quarter Of Irish Adults Consume Cider Once A Month

While overall consumption levels of cider are relatively high with almost a quarter (22%) of adults claiming to consume cider once a month or more often, there has been a reduction in consumption year...

C&amp;C Groups underlying trading to date, across core markets, is 'satisfactory' and in line with expectations, according to a statement it issued yesterday (6 July) update covering the period from 1...

The Irish Brewers Association (IBA) has welcomed the Labour party’s move to put down the Breweries and Distilleries Bill in a private members motion in the Dáil tonight (23 March). The bill, which...

Radina Shkutova has been appointed Marketing Director of Heineken Ireland. She joins Heineken Ireland from the Heineken Zagorka Brewery in Bulgaria, where she most recently held the role of Marketing...