The Top 50 Hotels in Ireland according to hotel search site trivago.ie have been, with Harvey's Point in Co. Donegal coming out on top.

The website ranked the hotels according to it's aggreagated user score and Harvey's Point won out with an overall score of 96.4, beating out The Killarney Park Hotel (95.5) and Heaton's Guesthouse in Dingle (95.5) to the top spot.

The top 20 hotels nationwide are:

The full list, available from the website, reveals that Co. Kerry boasts the most hotels in the Top 50 with 11, five of which are in Killarney. Dublin is second with seven and Co. Galway has six.

Speaking about the rating system, David Lintott of trivago.ie said: “The trivago Top Hotel Awards aim to judge all accommodation fairly, whether they are a guest house in Dingle, a B&B in Ballybunion or a luxury hotel in Dublin.

"It is really pleasing to see such a range of accommodation in our top 50, and it is fascinating that B&Bs are rated as highly as four- and five-star hotels. It appears that holidaymakers in Ireland are attracted to the family-run nature and personalised service of B&Bs."

Harvey's Point has proven a hit with guests on a number of occasions now, winning TripAdvisor's Travellers' Choice awards for the third consecutive year earlier this year.

The top twenty can be seen below. 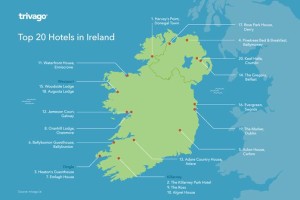 Nphet To Meet To Formulate Advice Regarding Easing Restrictions

No Guarantee Restrictions Will Ease On October 22, Says Taoiseach

Objections Lodged Against Plans For Nine-Storey Hotel In Dublin