The number of hotel brands in Ireland is set to increase, as more hotels are bought by investors, according to a leading property expert.

In its latest report, Savills Ireland noted that the high volume of hotel sales in recent years, particularly within the last 12 months, "has resulted in a significant change in ownership structures", with hotels rebranding and other hotels being subsumed by existing brands.

Tom Barrett, director of hotels & leisure at Savills Ireland, commented: "Traditionally, Ireland hasn’t been a location for hotel chains or brands; however we are now witnessing a change of the guard in that respect."

Notably, the Four Seasons recently rebranded under the InterContinental name, while Dalata announced plans to rebrand a number of its hotels under the Clayton name.

The report also noted that strong economic factors - including a favourable exchange rate for UK and US visitors - should keep occupancy high, which will boost sales.

"With more trips being taken, demand for hotel accommodation is strengthening and this is feeding through to an increase in hotel transactions," said Barrett.

In 2014, almost 60 hotels changed ownership in deals worth €440m, double the value of 2013 transactions. In the first months of 2015, two notable deals have already been completed with Lone Star purchasing the Jurys Inn Group for over €900m and Dalata completing its purchase of nine Moran Bewley hotels.

Below are some of the notable transactions that have taken place already in 2015: 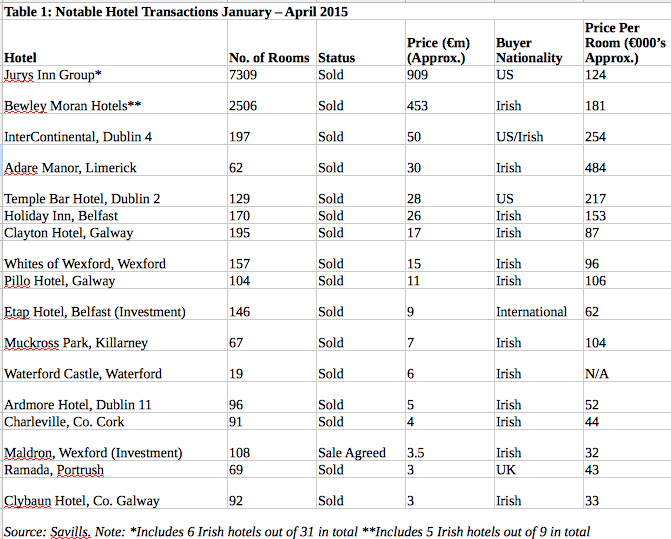 No Time Limits On Indoor Hospitality Services Under Newly-Agreed Guidelines

Glen Eden Hotel Of Belleek, Co. Fermanagh, To Be Sold Via Auction