Property consultants CBRE Ireland have released figures for the volume and value of hotels traded in the Irish market in the first nine months of 2018, which shows that 12 transactions, totalling almost €263 million between them, signed in the nine months to the end of September, 2018. In addition, there was a hotel investment sale totalling €17.5 million completed in recent weeks. This compares to 23 hotel transactions totalling approximately €87 million completed in the first nine months of 2017. 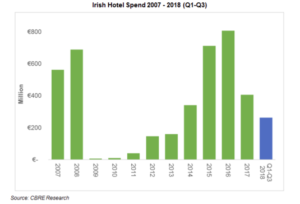