Published on Apr 15 2016 9:19 AM in Technology tagged: Technology / hospitality / Internet of Things

With internet-connected items now outnumbering humans, John Golden examines how the Internet of Things affects the hospitality industry, and speaks to Kyle Thacker of Uncorkd about iPad restaurant men...

With internet-connected items now outnumbering humans, John Golden examines how the Internet of Things affects the hospitality industry, and speaks to Kyle Thacker of Uncorkd about iPad restaurant menus.

It also offers great opportunities to save money for the business. A one-time payment for tablet- style menus can save on constant printing costs for paper menus, for example. For customers, it often adds choice and can be a time and money-saver.

The hospitality industry is one sector, however, where an overload of technological advancements is not always the best course. As the word suggests, hospitality is about the friendly reception of one's clientele, where the “human touch” is not only preferred, but demanded. With this in mind, restaurateurs, hoteliers and publicans have to find the balance to present itself as a friendly place with hands-on customer service, but with the technological nous to keep up with the Joneses.

A recent report by Hospitality Technology titled High-Octane Hospitality: The Impact of the Internet of Things in Restaurants and Lodging envisioned the future of hospitality when the latest wave of connected devices, the “Internet of Things” (IoT) becomes the norm in the sector. IoT, a term coined by British entrepreneur Kevin Ashton of MIT, refers to the network of physical objects - devices, vehicles, buildings and other items embedded with electronics, software, sensors, and network connectivity - that enables these objects to collect and exchange data.

As for what that means for the hospitality sector is a question of implementation. Theoretically, the report says, we could see a completely customised experience for each customer who comes through the door. Consider this possibility in an IoT world, as the report says: “A loyalty member is identified as he walks into the restaurant through his wearable device, triggering a display of his loyalty profile on the host's tablet. The host greets him by name and shows him to his favourite table. A server promptly arrives with a cocktail prepared to his specifications and the table-mounted tablet thanks him for his recent take-out order and presents a customised menu with a short video on specials similar to that dish.” That level of customised service may seem like overkill – even creepy – to some people, but it's an example of the level of possibilities technology can create.

On the owner side, being technologically advanced can improve the bottom line, cutting back on wasted time and money and even encouraging more customer spending. Apart from the obvious flaws to the plan by the Department of Health to add calorie counts to restaurant menus, a big argument against its implementation is the cost it would place on businesses. The RAI said it would cost restaurants €5,000- €10,000 to implement, forcing owners to constantly print new menus, not to mention the time wasted calculating calories. As such, alternatives may be sought out to traditional, paper- based menus.

One such company offering an alternative to paper menus is Chicago-based drinks menu company, Uncorkd. Dealing with a number of high-profile clients in North America including Hilton and InterContinental, Uncorkd entered the Irish market last year, supplying a Dublin pub with iPad drinks menus. With the rise of craft beers in pubs, and the new wave of restaurants making cocktails as important a factor as its food offering, customers are now asking for the drinks menu as often as the food menu. Uncorkd's menus show the full range of drinks, with details of each available.

With dozens of Irish craft beers now on the market, customers often want to know the story behind a beer they've never seen before; the iPad offers them this at the touch of a screen.

Touch of a Button 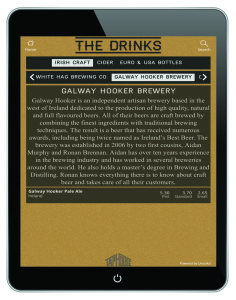 Apart from the obvious novelty factor of these menus, which can keep a customer engaged while in your pub or restaurant, the technology offers numerous advantages, for both customers and the restaurant, Kyle Thacker of Uncorkd told Hospitality Ireland. “To start, iPad menus offer the ability to do more with your menu. You can add more informative details about wines, beers, spirits or food. Digital menus are more engaging than traditional paper menus. There’s so much more you can do; add photos, descriptions, suggested pairings, and featured items. Paper menus have extremely limited real estate.

You can only put so much information on paper without it being cluttered and counter- effective. Digital menus aren’t restricted by spacing and layout, so we can provide essential information to guests in a clear and accessible way. This information all helps increase sales by encouraging more orders, and at higher margins.” For a business with a heavy rotation of offerings, paper menus can be unreliable, and customers can be left disappointed when the item they select is no longer in stock. Tablet menus eliminate this inconsistency.

“The reduction in labour costs for managing menus is a huge benefit. You no longer have to worry about printing costs. Changes to menus update automatically, and nearly instantaneously. Easing operational duties allows managers more time to focus on the dining room and drive revenue through an increased focus on service,” explains Thacker.

The Role of Servers

One of the topics often mooted about bringing hospitality into the digital age is the idea that it undervalues the staff and the role they play in making a customer feel welcome. Most people are more than happy to use a digital interface in come-and-go businesses like cinemas, supermarkets and even fast food outlets, but at a restaurant or bar people generally want to think their hard-earned money is being spent on an experience that only a friendly, knowledgable server or bartender can provide.

This is why it is important that technology is only to complement the service, not to replace it. “Restaurants have been slow to adapt to new technologies in the dining room itself. But that will change,” says Thacker. “There is a hesitancy from some restaurateurs to bring in customer-facing technology. But customers are bringing in their own technology anyways. Phones, tablets, and laptops are all common sights at restaurants. Dining in a restaurant is a social experience. I do believe some restaurant operators fear technology will diminish the human element of dining. But that just isn’t the case. We’ve seen technology accelerate social interaction. We don’t have ordering through our menus. This is helps keep that social element in place. Uncorkd wants to be a supplement to help servers and bartenders, not replace them.”

Of course, menus are just one possibility for owners to consider when it comes to upping their technology game. Innumerable options are now available for managers to boost their bottom line. Data management systems allow managers to monitor their sales and figures, a practice a lot of businesses still haven't adopted. Reservation and delivery apps offer restaurants the chance to fill seats left vacant by a late cancellation, or expedite the ordering process.

Technology to monitor food waste in restaurants – a huge cost to fresh food businesses – are becoming increasingly sophisticated. The options are many, the challenge for hospitality owners is to find which suit their business best.

Marriott and Starwood Reveal the Future of Their Luxury Brands

It's been more than a year since Marriott International entered talks to buy Starwood Hotels &amp; Resorts, and the speculation—about which brands will survive, what the loyalty program will look like...

Uber Technologies Inc. is laying the groundwork for a nationwide rollout of its UberEats service in the UK, according to several job adverts placed online. Three posts are available as part of a pl...

WhatWine Phone App To Be Sommelier In Your Pocket

Wine aficionado's and those looking to expand their palate will be able to use a smartphone app called 'WhatWine' to get wine recommendations, food pairing suggestions as well as being able to peruse...

Ten Travel Innovations That Are Totally Changing the Game

With airline fees that won’t seem to go away, seats that seemingly keep shrinking, and global threats ranging from Zika virus to terrorism, it’s easy to tell yourself that this is the year to stay hom...

Don't go to Paris. Don’t tour Paris. And please don’t do Paris.” The advice, offered by homesharing app Airbnb in a series of television commercials that have been airing in seven countries, promot...

US Approves SpaceX's Starlink Internet For Use With Ships, Boats, Planes